Tag Archive for Sermons and Devotionals

Each day at Gilwell Field, the Scoutmaster or Staff Chaplain will have the opportunity to deliver a daily devotional, as part of the assembly. This guide was originally developed for the six-day format, with the expectation that it might be modified to fit future Wood Badge Courses.

For each devotional entry, there are four elements:

Chaplain’s notes – listing which Wood Badge curriculum is being presented later that day, in order to give context for the daily devotional. This is intended for the speaker, but not to be shared with the participants until after the course.

Introduction – an opening thought or scenario to set the tone, which reflects elements of the upcoming day and shows where prayer or growth might be coveted.

Prayer – an ecumenical prayer, suitable for all faiths, to further focus the hearts and minds of the participants and staff, and then allow them a moment of silent meditation for their own communing with their understanding of their Creator.

Space – where a supplemental scripture or additional prayers might be written, depending on the format at faith basis of the course.

I hope that you find this useful. Feedback is a gift, so please consider leaving comments below regarding how this might be improved or better utilized.

For the Wood Badge course, there was an initial 25m instructional on Interfaith in Scouting, followed by a 25m Worship Service.  Attached are the instructional notes, the worship service program and the sermon (10m):

Serving Him, and you, through Scouting.

A Devotional for Wood Badge Staff 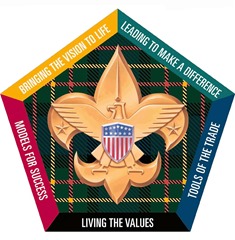 Some might have heard the phrase “A Church should not be a Warehouse for saints; it is a Distribution Center for servants.”

It’s a cute way of reminding folks that the miracles, parables, historical accounts and even the dialogs written in our scriptures are not there purely for information. While the books and the classes can help the reader make key decisions in their faith, the primary purpose is not merely to educate, but also to energize and enable the believer for the mission that they are called to. If reading the written words or attending church were simply to inform or entertain, then they would mostly be a waste of time, albeit an enjoyable one.

Wood Badge is the same way. Our own Wood Badge experiences would have been a waste of time, albeit an enjoyable one, if they had only served to inform or entertain us for the six days that we were there. Similarly, the upcoming course is not really even to inform or entertain those participants whom we will be serving. As leaders, we should be mindful that our primary audience to impact with this event are those whom we will likely never meet — those that will be affected by the new leaders that we are energizing and enabling during our course.

PLEASE PRAY — To our Creator, we humble ourselves. We ask that you would help us to settle our hearts and clear our minds, so that we might be better instruments to educate, to energize, to enable, as well as to entertain those who are preparing to take this journey with us. We lift up those that are being left behind while we take this journey together and ask for an extra measure of patience, protection and blessings for those who must endure our absence. And we lift up not just those who will be participating, but even more those who are destined to be impacted down the road by what we humbly deliver together. Thank you for those that came on the trail before us, thank you for those on the trail ahead that we are here to serve, and thank you for your provision along the way. Amen.

Personal blog of the Holy Spirit on the Hill

Whether a miracle is visible for miles and observed by hundreds or is seen and felt in the heart of just one, it seems impossible to deny that a supernatural force of provisioning and care isn’t at work every day. But it is important that when divinity bestows an act of grace, intercession or prophetic wisdom; that the benefactor must become a witness, so that others’ faith can be bolstered, so that others’ prayers can be validated as answered, and so that all of us can be affirmed with each other that our God continues to be amongst us. In other words, Grace fell upon my shoulders last weekend, and so I am obliged to share that moment.

It was supposed to be just another Scouting weekend, with all of our local troops camping together. All day, I knew that I was supposed to preach the next day for our camp’s worship service, and just couldn’t find my normal passion or excitement to even peruse my sermon file for what I would speak on. All afternoon, I had been heartbroken over a Scout parents’ story of struggle that their son was going through. They were going through an unimaginable parental crisis as their Scout realigned his lifestyle, and I felt so helpless other than to assure them that God was in it. The words felt so empty, and yet I knew it was all I could say.

The Holy Spirit was in the Wind

On Saturday night, I was sitting in the dark on a hill that was overlooking a Scouting campfire. A persistent wind was blowing in from the lake, as we were on a peninsula, when all of the sudden, I found myself listening inward instead of watching outward. I truly felt “quiet” – not as in what my ears could not hear, but in my shoulders relaxing, and my mind that wasn’t multitasking, and my heart that wasn’t racing – I felt “quiet.” And then I heard the echoes of several explanations of “The Prodigal Son” as it had been expounded to me in numerous settings. And then I realized that while I was hearing the words that had been used over years past, it was in my voice. The words kept coming and I understood that I was hearing what I needed to say. It was all that I could do to take care of a few minor obligations so that I could run to my laptop and feverishly type into the night.

CLICK HERE to read the sermon on The Prodigal Son, which I cannot claim to have come from me.

Who else was in the story?

It was easy to see the struggling Scout who was recently redeemed (and his parents) in the story of the Prodigal Son, but after I finished typing it, I saw others:

I do hope that each of those that folks listed above, including me, and the other 400 folks that heard the sermon that morning, each found themselves somewhere in that story – perhaps with some experiencing a gentle nudging back into their Father’s Grace.

sermon – Are you a Prodigal Son?

Our district’s annual Camporee has many journeys taking place:

We are all on journeys – some that need a little course correction, and others that need a 180 reversal.  This sermon starts with reading the Christian Parable from Luke 15:11-32 on “The Prodigal Son”.  When delivered to a multi-faith audience, as ours was, we explained that while the story being read comes from the Christian Bible, listen to the story as it relates to each of us.

CLICK HERE for the sermon of the Lost Son (or Scout)

Note: The inspiration for this sermon came through a breeze that I can only describe as the Holy Spirit in action — click here to read more about that experience.

One Speaker with Three Shadows

A few weeks ago, while at church, one of my sons pointed out that the speaker on-stage was casting three shadows. Later, I explained that there were three spotlights on him from different directions — and each light was casting a shadow in-line with that light.

For my son, I went on to explain that the speaker and his shadows was one way to understand the Holy Trinity — God the Father, Jesus the Son and the Holy Spirit. The speaker was the same speaker — but depending on the relative perspective of the spotlight, different shadows were cast. In much the same way, while there is but only one God, He casts multiple shadows depending on your perspective — as the all-powerful original Creator, as a sacrificial savior for the sins of the world, or an all-knowing and ever present source of righteousness and discernment — or other perspectives, such as Healer, Redeemer, Counselor, Defender, Provider, etc.  The key to remember is that all of those impressions are simply shadows of our God, based on the perspective that you are looking at Him. Of course, in the bigger picture, there can be no shadows without light, so it shouldn’t surprise anyone to find so many shadows (facets) cast by that which we call the Light of the World.

The key idea of interfaith scouting is to enable each scout to grow in their own faith – according to their own understanding of who God is. As a Chaplain (adult) or Chaplain’s Aide (CA) youth, your role is to facilitate an environment for that growth — even though some scouts may not share the same faith as the C/CA. When you, as the C/CA, are delivering the reverence aspects of your scouting program, you are like the speaker in the initial analogy. Each scout will have a different perspective, but hopefully they will hear wisdom and see opportunities to give thanks in the shadows of their understanding of God that are enabled through the reverence program that you deliver. As the C/CA, you may be a speaker, but your goal is to deliver a program that helps each boy recognize a shadow.

As always, thanks for reading.

1.The first delivered by staff, in order to not only provide opportunities for Reverence but also to instruct the participants in how to deliver an Interfaith service.

2.The second is delivered by the participants, with coaching provided by the Course Chaplain.

I was honored to serve as the course Chaplain for Circle Ten’s Wood Badge 98 course, at Philmont in August 2011. Here are their materials: