In 2014, I conducted a quantitative research project in support of my Doctorate in Commissioner Science in regard to the “Measurable Impact of Unit Commissioners in support of their units’ program effectiveness and their Journey to Excellence (JTE) Attainment” 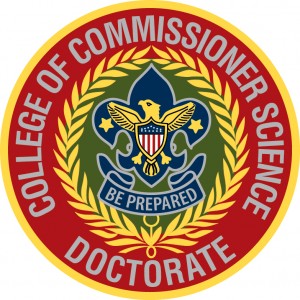 Even a small amount of time provided in unit service by a Commissioner, directly equates to a quantifiable impact in JTE attainment and overall unit health, as measured by enrollment/retention metrics.  New Commissioners (or potential commissioner candidates) often underestimate their impact due to humility or lack of perceived value creation — particularly when only periodically attending meetings or functions in what is presumed “healthy” unit.  However, the author of this thesis believes that such engagements can be quantifiably measured with the following results:

· Suggested measurement of how little (or much) time is required to help a unit be successful, through the use of quantitative surveys of participation

The thesis author has vocational experience with developing and analyzing quantitative survey data, and intends to create three interconnected multiple-choice surveys, with 10-20 topical questions per survey:

SURVEY 1 — For one DC/ADC per district: gathering top-line numbers, JTE metrics, qualitative assessment of participation and staff health — along with request for a UC roster

It is important to note that individual unit and commissioner responses will NOT be shared, however correlations such as when a UC states their perceived value creation to their units, versus what a unit leader states as received value from their Commissioner, will be mathematically aggregated — particularly when confidential data both sides of a relationship have been gathered.  Each survey will include at least one free form field for anonymous unstructured feedback or other response/suggestion.

The scope of the research findings will be Circle Ten Council (C10), serving the North Texas and southern Oklahoma region – however non-C10 participants will be engaged twice during the process; during survey formation to learn from potential similar research work and during the survey itself. Survey responses from outside the C10 council will be used for comparative discussions of the data, while the report’s findings will be focused on actionable insights within C10 council.

Also notable is that the research is not dependent on a majority of C10 units or Commissioners responding (goal is 20% of Council, with 10% being considered a minimum for data validity).  However, the survey is dependent on DC/ADC (one per district) to reply, in order to provide top level data and initial roster for aggregating down.  Some level of aggregated UVTS data export may also be meaningful during data correlation, at the discretion of Council Commissioner Staff.

The final result of this research will come in three assets: